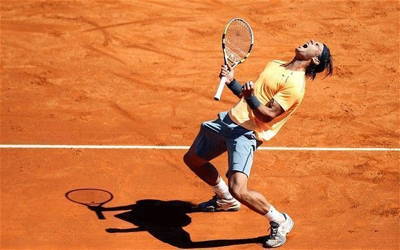 Great tournament that awaits us in Madrid although as we know Federer is not in the whole clay court tour, and in the end Marin Cilic has been added the absence of Marin Cilic.
The big question is whether Nadal will continue to win matches and tournaments in the same way as he has done in Monte Carlo and the Conde de Godo.
If there is a clay court where his rivals can stand up to him, it should be this one because of the height at which it is played and the advantage that this gives to the hardest hitters.

It is important that you listen to the audio because there you can hear a lot of information in addition to the picture of the painting and the written summary.

Again, a top draw that is not easy for Nadal with the likes of Monfils, Thiem, Del Potro, Gasquet, Bautista and Anderson.
Very tough debut for the Spaniard (if Monfils gets through the round), because the Frenchman is always a very complicated player who grows with big rivals as is the case of the Spaniard.
In quarterfinals should meet Thiem, but with doubts, as this Thiem is nothing like last year and any player puts him in trouble ... Against Nadal I do not see any option.

I think his opponent in the quarterfinals will be the Argentine Del Potro who has always done well in Madrid, the Argentine has an easy debut but then opponents like Gasquet or Kohlschreiber can put him in many problems, both players are very strong and it would not be unreasonable a defeat with any of them.
Personally I see a lot of options for Gasquet, in Monte Carlo he had a great tournament and today he played at a great level against Berdych.
His drop shots can do a lot of damage to Del Potro who finds it difficult to move forward because of his large wingspan.

Although I think that if Del Potro arrives (I insist watch out for Gasquet), he can create many problems for Nadal because of the cannon he has on his forehand and his good service.
I think Nadal will take advantage of the high bounce of his topspin shots and that will cause many problems for the Argentinian who will not be able to beat the Manacor player.

As in the women's tournament, I'm going to go for the surprises in the lower part of the draw, which is much more open and there is much more equality because there is no player who looks far superior to his rivals.

The first big first round match is the duel between Nishikori and Djokovic where I expected even odds and the bookmakers are quite confident in the Serb, at these odds I will definitely go with the Japanese and I will leave it as a recommendation at the end of the article.

Chung has left me with a very good feeling in Munich despite losing to Zverev and he is the player I think will reach the semifinals after a historic Asian duel and beating Dimitrov or Pouille in the quarterfinals.

At the bottom, I can't resist a big surprise, one of those players who appear when you least expect them.
Very dangerous Isner who has grown a lot with the great tournament in Miami and to which comes well the speed of the track and the second service with high bounce that he can do here.

The surprise that advanced for me is Fabio Fognini, a player with a lot of quality and that despite the fact that in Madrid he never got past the second round, he only loses here with Top 5 players and fighting a lot until the third set.

I think this will be his year (if he manages to beat Mayer), and I trust that he will beat Verdasco and surprise against a Zverev who comes somewhat loaded from Munich.

An unpredictable semi-final where Fognini can disconcert Chung a lot because of his anarchic game, but I think that in the end it will be Chung who ends up boring the Italian because of his great defences.

As it happened in other tournaments I don't see value in the final winner of Nadal, the odds are very low and in a week and 5 matches anything can happen, even an injury.

I think the player from Manacor will win with less problems against Chung than he could have against Del Potro, Fognini or Zverev because of his more conservative way of playing and that doesn't hurt Nadal.