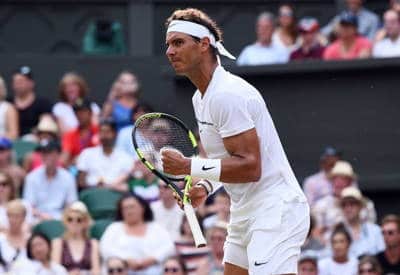 The third Grand Slam of the year begins, the third BIG battle for the number 1 between the two GOATs (each will have his own).

So far both have been able to defend their throne in the first two Grand Slams, but these last two are the toughest for both of them.

For Nadal the US Open is much more difficult to defend than Roland Garros, and for Federer it may not be enough to win the title because Nadal has the advantage of having fallen in the 4th Round so that to keep the number 1, it is enough to overcome that round this year, and in case of reaching the final for example, it would give him a lot of margin in the US Open.

Apart from this BIG battle we have other interesting points to follow in this Grand Slam.

Can Zverev finally do well at a Grand Slam by reaching at least the semi-finals?
Will Kyrgios finally be able to focus on a tournament and fight to the end in conditions that favour his tennis?
Can anyone break the Federer-Nadal duopoly that has won the last six grand slams?
After the great tournament at Queen's, is Djokovic back to his best and can he at least make it to the final?
What role will Murray be able to play in this tournament that brings back so many good memories for him and after his comeback from injury, leaving a very good image in Queen's and Eastbourne?

All this and much more you can read and listen to this analysis of what I expect to happen at this Wimbledon, it is very important that you listen to the audio because it gives many more details that can help you a lot to place bets throughout the tournament apart from the recommendations that I leave at the end of the post.

Remember that we have just predicted the final of Queen`s (Cilic and Djokovic) and its winner (Cilic) with odds of 5.50 and the winner of Birmingham (Kvitova) with odds of 8.00.

At the top is the big favourite Federer, and several possible contenders to knock him out of the final, Cilic, Dimitrov, Wawrinka or Raonic are the most striking options.

In terms of names the level of this side of the draw is much lower than the other side where the favourite is Nadal but with more opposition (theoretically).
On the other hand personally for me, Federer is going to have it very complicated to revalidate the title, I believe that all his ?possible? rivals are very complicated players in grass, Lajovic will be the easiest, from there, Lacko comes from losing the final of Eastbourne, Youzhny on grass is a very dangerous player who plays very well the cut backhand, Coric comes from beating the Swiss in the final of Halle and having him against the ropes in Miami.
If the Swiss reaches the quarter-finals (I don't see it at all clear), he would face Monfils, Anderson, Querrey or Gasquet.

For me the surprise will be Monfils, I liked him a lot in the tournament in Antalya, very strong with his serve and I think he will be the one to give the surprise and get into the quarterfinals against Federer although he has a very tough match against Gasquet where he is not favourite.

If Federer and Monfils reach the quarter-finals the Swiss should emerge victorious because it is very difficult for Monfils to withstand a 5-set grass match while maintaining consistency against Federer.

In the other semi-final for me Cilic should be without too many problems, none of the possible opponents I think can beat the Croatian on this side of the draw, Kudla I think he will pave the way by eliminating Raonic, the American is playing very well in this grass tour and despite the great service of Raonic, I think the Canadian is still not at his best level.
Dimitrov is not fine, Wawrinka still has not recovered his sensations and Isner does not give me enough confidence despite his great service.

As I said I see very complicated that Federer reached the semifinals, and if he reaches that round I think that today Cilic is superior to the Swiss, his service is working very well, and is better than ever in terms of winning shots, also already knows what it is to stand up to the big ones, and win a Grand Slam, the Croatian is not a player who falls down against the best (as does Gasquet for example).

Many players who can give the surprise on the lower side of the draw, Edmund, Khachanov, Kyrgios, Ebden, Feliciano Lopez, Tomic or Gulbis are players who can make a very good role in this Wimbledon, and I do not expect much from players like Del Potro or Thiem.

Undoubtedly Djokovic has had the most complicated part of the draw to reach the semifinals, Edmund and Khachanov are two stones in the road that can make things very difficult for the Serb who I think will improve as the matches progress and will gradually recover his best version that will make him reach the semifinals.

From the possible third round with Kyrgios, Tomic, Gulbis or Zverev anyone could reach the quarter-finals.
Zverev is still not at a good level and I think that a player who comes from the qualifiers with a lot of rhythm and with a great service like Gulbis.
Tomic I think he could surprise against Kyrgios but I see Nick very strong and Tomic much more irregular.
In a possible duel between Gulbis and Kyrgios I have preferred to play with Gulbis who for me has much more value and that's why I put him in the quarterfinals.

Already with Djokovic I don't think any of them will be able to beat the Serb who would already have a lot of rhythm and will have recovered his sensations, so Djokovic would be the first semi-finalist of the lower side of the draw.

In the next part the favourites by ranking are Del Potro and Goffin, and I think that neither of them will get very far, but I expect a lot from Murray who comes quite strong from the previous tournaments despite the two defeats in three matches.
Murray has a very complicated path, starting with Paire on grass is a very complicated debut, Chardy or Shapovalov are also two tough opponents for the second round, I think Feliciano will surprise Del Potro and we can see a duel of friends between Feliciano and Del Potro.
Ebden will be Murray's opponent in the 4th round, eliminating Goffin in his first match, and with a fairly easy path after that.
I see Murray regaining some of his form and reaching the quarter-finals.

On the other hand I think that Nadal has been very lucky in the draw, not for the quality of the players but for his way of playing, Nadal is improving as the tournament progresses and the court becomes slower by wear, the players that hurt him the most are the big servers and players who do not leave rallies as he suffers in his services and with the grass intact the servers try to play two strokes and it is very difficult to break their service even if he is much better tennis player than them (as is the case).

In this case his possible opponents would be Sela, Kukushkin, Zverev (the only big serve), and Fognini, none of the players who do great damage to Nadal and there should get there without much trouble.

A Murray duel ? Nadal will start to delight the English but I still do not see Murray at Nadal's level despite playing on grass, Nadal is with a huge level of confidence and in a 5-set match with a Murray without tournament pace should not have too many problems.

And after this great match we would have another great match between Djokovic and Nadal, taking into account that Djokovic on grass is one of the best, he still lacks a little bit of game and confidence (that's why he lost the final of Queen's to Cilic) and that will continue to take advantage of the Spanish to stand in the final.

In the final, the court is much slower than it was at the start of the tournament, Cilic's serve will no longer be so definitive and we will have to "play" much more tennis.
For Cilic to beat Federer is a moment of great joy that sometimes prevents you from playing at the same level the next day.

Nadal I think he is still at a higher level than Cilic, in fact I think that right now he is above all his rivals, because for me Federer is nowhere near the level of last year and the rest is missing a step, especially without the great advantage of the speed of the services (in indoor no longer).
So I think Nadal will win his second Grand Slam of the year and put himself in a very good position for the battle for the number one spot at the end of the year.