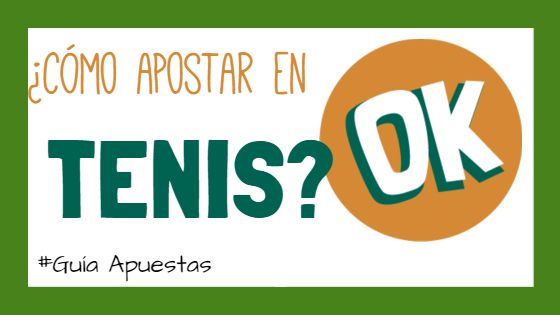 In this section we are going to teach you which are the most used betting terms in order to know how to bet on Tennis and to interpret accurately the forecasts of our experts.

To this end, we will focus on the main markets:

Winner market. How to bet on Tennis

They are undoubtedly the most intuitive bets since, as their name suggests we are betting on the player we think will win the match.

The frequently asked questions in this market usually arrive when:

A) One of the players withdraws from the tournament before the start of the match.:

In this case 100% bookmakers will void the bet and refund your stake.

B) One of the players retires in the middle of the match.

In this case it will depend on the bookmaker where you have placed the bet. As a general rule, if you withdraw during the first set the bet is void and the money will be refunded.

Once the first set is completed, if a player retires in the second or third setThe majority of bookmakers they will give it as a loser thus paying off all bets placed on his opponent.

It is undoubtedly one of the most feared terms when entering the world of betting, as it sounds like a complex term. But as we will explain below with an example, it is much simpler than we think.

That number that appears in negative (either integer or decimal), is the number of games to be subtracted from total number of games added up by the player to see if we have won the bet. That is, if we bet on Nadal -2.5 gamesIf you have a game, you must first add up the number of games each player has played in the match. For example Nadal has played 12 games and his rival 8.. In this case we must subtract 2.5 games to NadalThe following would therefore be left 12-2,5= 9,5 sets of Nadal against 8 of his rival. As we can see Nadal would still have more games, so the bet is correct. In the following example we will see it very easy.

The bet is acertada as Nadal has played 12 games, which if we subtract 2.5 games from his handicap, is still superior to the 8 games played by his opponent.

The result with handicap would have been Nadal 9,5 Vs 8 Carballés.

The bet would be failed because, if we subtract the 2.5 games of the handicap from Nadal's 14 games, the result would have been Nadal 11,5 games Vs 12 games Carballés.

In the case of a positive handicap the procedure would be the same:

The bet is acertada Muguruza has played 9 games, which if we add +4.5 games to her handicap, would be more than the 13 games played by Venus Williams.

The result with handicap would have been Muguruza 13,5 Vs 13 Venus Williams.

In addition to handicaps with decimal numbers, we also find cases where we see Nadal -1 Nadal -2. What would happen if we bet on Nadal -2 and the match ends with 7-6 7-6 for Nadal? The result after subtracting the handicap would be 14 -2 handicap = 12 for Nadal vs 12 for his opponent (6+6). Therefore, in these cases the bet will be NULA.

In the event of either player retiring during the match, all bets on this market will be VOID by the bookmaker.

In many occasions the online bets we will see will be related to the number of games that will be played in the match, that is why it is important to know what it means when we get?

The number of games played will have to be greater than 20.5 sets.

We would be betting on the exact opposite of the previous bet.

On this occasion, the number of games played was must be less than 20,5 sets.

As the name suggests, these bets allow us to try to guess the exact result of sets to be played in the matchTherefore, a 2-0 in favour of Nadal will mean that the Spanish player will win by 2 sets to 0 to his rival. Few more comments on this market due to its clarity.

Sometimes there are certain bookmakers that do not have an exact score but do have handicaps, hence we are going to explain several examples:

If, on the other hand, we see for example Del Potro +1.5 against Nadal, to the result of the match we add 1.5 sets to Del Potro. This bet is the same as Nadal will not win the match by 2-0.Whenever the match ends with a result other than 2-0 Nadal, our bet will be ACHIEVED.

As in the other markets, in sets we also find the possibility of betting on over/under sets, although by now we are sure that you already know what it means, we will give you a couple of examples examples:

On this occasion, the bet will be successful if the following have been played in the game more than 2 sets.

If the match ends 6-4 6-4 the stake will be FAILED. Since only 2 sets have been played.

In the event that any of the players retire during the matchall bets in this market will be NULL by the sportsbook.

Best bookmakers to bet on tennis.

Finally, I'm sure the question you are asking yourselves is which bookmakers are the best for betting on tennis, whether it is because they have the most markets, the best odds, the most intuitive platforms, welcome bonus, more payment methods?

Here are the ones that, in our experience, are the most suitable for following our specialists:

Once you have assimilated these concepts, you will be ready to bet on Tennis and start winning with the help of our experts..

Check out our tennis tipster stats: